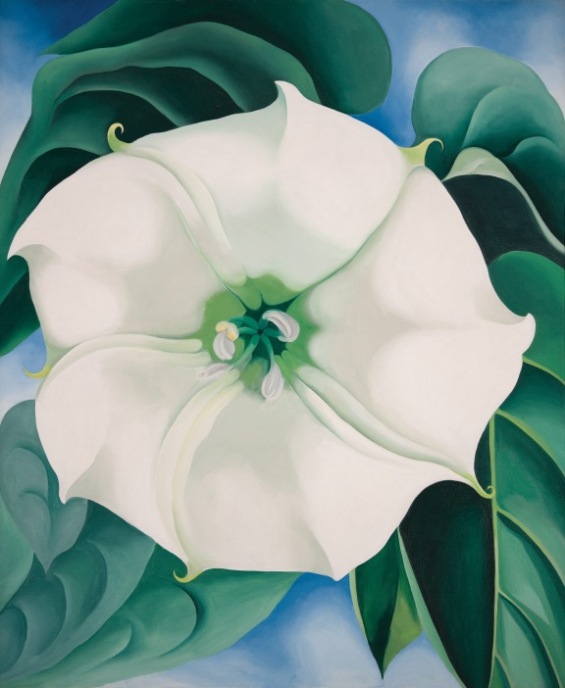 It has been 23 years since I saw the first retrospective held in London at the Hayward Gallery of Georgia O’Keeffe’s work. Tate Modern’s current retrospective is a much bigger and broader survey covering 60 years from the 1910s up to the late 1960s. Set chronologically over 13 rooms, it’s impossible to absorb the detail and the sheer volume in one visit – these 100 works certainly shows the breadth of O’Keeffe’s creativity. The catalogue itself is rich with articles from Susan Hiller, Griselda Pollock, Georgiana Uhlyarik and curator Tanya Barson, covering diverse aspects of O’Keeffe’s art and life from her artistic dialogue with Stieglitz (Sarah Greenough, senior curator at the National Gallery of Art, Washington), Location and Dislocation (Cody Hartley, Director of the Georgia O’Keefee Museum) to The Abstract Landscapes (Heike Eipeldauer and Florian Steininger).

There is no denying the freshness and vibrancy that O’Keeffe’s paintings convey, they are at once knowing and seductive combined with discovery and innocence. Her obsession with painting the same image over again heightens this. O’Keeffe was a painter of the elements in nature – flowers, rocks, skulls, skies that are deliciously delivered with a keen eye and strong contours, colour and plane. They are primal and sexual because of the elemental subject matter by way of association – I enjoy this synesthetic transformation from the real to the magical.

Known as the ‘mother of American Modernism’, O’Keeffe’s work matters, at the time she was painting and now. She remained true to her own vision, which was based on finding the essential, abstract forms in nature. We are fortunate that we have access to her writing, interviews and documentaries where we can see and hear her voice. Her work, to give it value, has to be pitched against her contemporaries too, although not fetching nearly as high value in the art market as male painters. Selling for over $44m in 2014, Jimson Weed/White Flower No. 1 (1932) was the most expensive painting sold by a woman – this sets a precedent in a world where women art-historically have been written out, ignored and uncelebrated. O’Keeffe marks the change not just in the art market, but also in our consciousness as a painter of value. In 1946 she became the first woman to earn a retrospective at the Museum of Modern Art and in 1970 a Whitney Museum retrospective.

So what’s not to like? I didn’t enjoy the skull paintings as much as I would have liked to, the definition and tone wasn’t to my palette. I would have preferred to see the skulls as pencil or charcoal studies. I found some of her urban cityscapes of New York stark and claustrophobic; you sense how detached she is from her subject matter compared to her later works in the desert. Flat vertical lines, often in silhouette; her painting years in New York left me flat – the daring and vibrancy in her nature works is where she really takes flight and she comes into her own. Resentful of any typecasting, taking on the New York skyscrapers as her principle subject from 1925-1930, she said of this time she wanted to be,

Known predominantly for her flower paintings, it’s easy to see why, they have a vibrancy and life force and you sense the joy she had in painting them. They fill the frame mainly in singular form, cropped and magnified. Her flower paintings have had much over-exposure and analysis compared to other themes in her work. The artist and carer for the last two years of her life, Christine Taylor Patten, tell us of her simplicity and ‘oneness’ with what she felt.

O’Keeffe was a woman who did her own thing and defied the norm of the time – had an affair and then later married her mentor and lover the photographer and gallerist, Alfred Stieglitz. Stieglitz wanted O’Keeffe to be the ‘modernist woman’ and becoming the object of his vision and photography, he sexualised O’Keeffe.

Stieglitz’s images of O’Keeffe sit in the gallery next to O’Keeffe’s artwork, revealing her nudity in cropped forms – torsos, hands, face, which heightens the intimacy, these are moments that feel very private. We see the artist as subject and lover – how do we read and relate to these images next to her paintings? That she was bold, independent, and thoroughly modern?

Stieglitz exhibited these images of her and her paintings in his gallery and they celebrate her form as much as the forms on her canvases. There is no denying the open and bold way she looks into Stieglitz’s lens, these photos are not about adornment, and they are beautiful in their simplicity and openness – much like her artwork.

In Griselda Pollock’s essay in the catalogue, Seeing O’Keeffe Seeing, she talks of what happens when we ask the question what is the artist trying to see? As opposed to asking ‘what kind of artist is she?’ And, ‘where does she fit art historically as a movement or style?’

“O’Keeffe’s life and work intersected with a new consciousness amongst women – artists and art historians alike – that was articulated through artistic practices and that demanded a new kind of art history after 1970.” 5

Pollock goes on to say that the dominant theme of the reception of O’Keeffe’s work is that she is a ‘woman artist’ rather than an artist that is a woman. O’Keeffe is famously quoted as saying,

How O’Keeffe saw herself, demonstrates the shift in consciousness and how we perceive her art. Fiercely independent, living remotely, driving endless miles in search of new rocks, bones and views in the landscape, she often camped out in the desert and adapted the back seat of her car to paint, shielded from the harsh sun. Pollock goes on to say,

“… if Modernity can be characterised as giving rise to a profound challenge to this concept of ‘Woman’, the making of modern art by modernist women is a remaking of both what woman can be and how to exist beyond its definitions but not outside of one’s gender, in the world” 6

It is O’Keeffe’s later work and shift further into abstraction that places her high up with her contemporaries – Mark Rothko, Helen Frankenthaler, Barnet Newman, Josef Albers, Agnes Martin.

I love the luminous abstract paintings looking at skies and the landscape through the contours and holes of rocks and skulls burnished by the wind and bleached by the sun. Her palette is pared down and the line is simple. Her mastery comes to light, similar to her earlier minimal abstractions in charcoal in the 1910s. She returns from abstraction to figuration back to abstraction again with a unity and growth that has evolved in the way she had. In these later works there is a balance with nature and abstraction, the organic and geometric.

The abstract landscapes and various doors and windows she painted again and again – minimal and inventive in their simplistic form, especially in My Last Door (1952-4) which,

The paintings in the last three rooms keep my attention the longest – the canvases are bigger, the lines fewer and her palette is restrained and this is where the flatness of her style works, especially in White Patio with Red Door (1960) and Sky With Flat White Cloud (1962) and Sky Above the Clouds III / Above the Clouds III (1963).

O’Keeffe shares her vast knowledge, her extensive travels, her nomadic existence and she gives it back to us. What is important to her becomes important to us. She defined a way to live that was intrinsic to her art; with a free independent spirit she immersed herself in this sparse landscape and dedicated her life to painting it, searching for the purest form and line. It is the feeling of expansiveness and endless horizons that are the closest she gets to taking the viewer to infinity.

4 Art and the crisis of Marriage: Edward Hopper and Georgia O’Keeffe, by Vivien Green Fryd, Chicago (2003)

This site uses Akismet to reduce spam. Learn how your comment data is processed.